I believe in Kabza De Small supremacy. And I’ll tell you why. Or at least try to.

At 18, as a number of 18-year-olds do out of naivety, I found myself in a string of chaotic connections. The first time I heard “GEMINI”, I was in a dimly lit hotel room, chugging cheap red wine straight from the bottle; in the company of one of such “friends”. To say I connected with this album would be a disservice – I ate, slept, and breathed this album throughout the entirety of 2019.

In this 16-track debut masterpiece, Tay concisely explores the nuanced complexity of modern-day romantic connections, unrestrained in honesty and rawness. Released 26th of March, 2019,  after a number of sneak peeks, Gemini has solidified Tay Iwar’s status beyond doubt, as an artist with impeccable songwriting and production skills; carving a unique niche of alternative soul and Afro-fusion.

Three years later, these songs still ring timeless.  Gemini isn’t just an album, it’s an exquisite work of art that delves deeply into the duality of the human psyche. Gemini season just ended, and we’ve decided to bring back this album.

Alluding the album title to his star sign, it’s interesting to see how this album is also an attempt at self-reflection without it being too bogus. Gemini is the third sign of the zodiac, one that can have a polarizing and chaotic social reputation sometimes. Master communicators and quick to evolve, Geminis give very much “I’m just trying to hustle and play the game” energy, something Tay digs into over the course of the album, especially in songs like “SUGARDADDY”.

This narrative is brought to life starting from the avant-garde cover art where we see an image of Tay in the middle, with two mirror figures on opposite ends of the stylized image. The white figure wears a turban draped in clouds and flowers, while the darker figure has horns with a menacing expression; surrounded by black and grimy green hues. The peacock eyes symbolize the sage status that Tay adopts in the portrayal of the album. This already hints at the emotional tension that we are to experience throughout the album.

“It’s like I’m looking at the sun in the morning when I lay my eyes on you.” Like the budding stages of new romance, the self-produced 2-minute intro “SATISFIED” gives all the fuzzy feel with Tay seductively serenading his love interest with sweet sayings over sleek mid-tempo beats.

“You were too cruel to love, heaven only knows. I want it all; Winter, summer, autumn, fall” is the crooning chorus of  “WEATHER SONG”, the Afro funk bop where Tay describes the profound but equally disappointing experience of romantic love 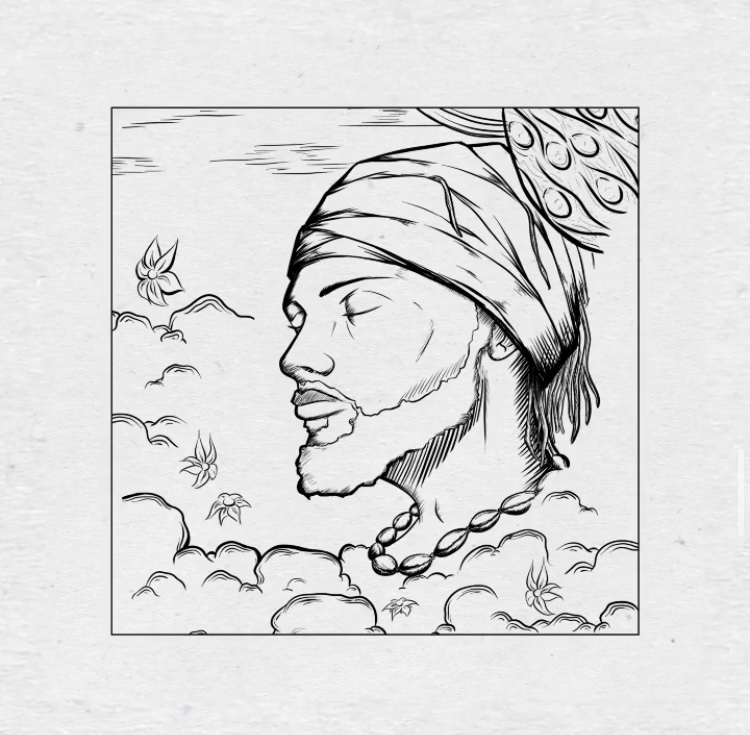 One of my favorite things about the album is how each track with glaring meticulous attention to detail, is crafted with distinct quirks; easy for them to stand on their own. 16 songs is a LOT but regardless, the cohesion across the album’s soundscape is airtight.

“ITS OKAY”,“STRANGERS” and “FOOLS”, all continue to chronicle his crumbling esteem as a result of his lover’s unpredictability, and even indifference. With surprising gentleness, he continues to beseech her to rethink her actions and consider acting right.

It isn’t till “KEEPS” we finally get to meet the darker cynical Tay. Fed up with his lover and retorting to subtle sarcasm and jabs, the song ends with a monologue of his love interest declaring reflections of change.

In his interview with Okay Africa, Tay speaks on how the first song to be created off the album as early as 2014, is “UTERO”. It’s even more beautiful when you find out that Utero is the Portuguese word for “womb”. On first listen, this is the song that really pulled me in and in my opinion, one of Gemini’s top 3; “CALL U” and “SIDELINES” are my two other favs. “Tell me, is anybody there? It’s time to believe what I’ve been told”, a heart-tugging question that Tay already knows the answer to. We can really hear the classical influence that Tay grew under in the composition of this track.

In groovy upbeat songs like “SPACE”, “SUGARDADDY” and “DON’T KNOW” featuring his brother, Suté Iwar; he collaborates with other Gemini outliers, Odunsi and Santi, with vocalist Preye. In these songs, the push-pull dynamics are even more prominent.

The album ends with lustful string melodies of the glittery songs, “MIRACLE GIRL” and “CALL U”, leaving us with an open ending of the tale. It’s no fairytale ending, but the practical reality of how difficult it can be to end these distorted entanglements, even in the face of glaring codependency. Gemini is the album that will draw you in, while you find yourself deeply resonating with its message; regardless of who you are.

Thank you, Tay, for giving us such a gem.

These days, we find ourselves entrenched in the terrifying reality of our giddy obsessions with the digital world—the liminality of our physical disconnect from the real world. Eritrea-born RIMON explores the matrix surrounding human behavior and social media idée fixe in relation to our reliance on technology on her third EP; Digital Tears.

Named after one of the biggest stars in the universe, UY Scuti sees advancement in the evolution of Olamide’s career that was set into motion with his last album Carpe Diem. The entire album explores the fusion of Afrobeats with different genres switching from R&B to pop, dancehall, and reggae.

Hear me out, no, hear him out. Follow the music, there’s a storyline. Am I overthinking it? I don’t think so. I think there’s a storyline. Okay let’s imagine Phaemous’ recently released debut EP ‘PHÆWAY Vol. 1’ was a storybook, or a movie script and we are reacting to each chapter out loud. Well, I am. Just follow the storyline. Some of you might relate because the project explores the realities of young people in relationships these days.

I had watched Tobe’s Instagram posts and admired his art since I discovered him a few months ago, but I hadn’t properly reflected on how much his art speaks to our reality as Black people. This past year has been a long one; fighting for ourselves and our freedom as Black People against police brutality and impunity across the world, and with the emotional and mental wounds from the aftermath of the EndSARS protests in October still fresh in my head, I immediately decided to write a piece about the Houston-based rapper when he posted the video for WILDINGS featuring Olu of Earthgang + Duckwrth on Instagram. Little did I know that he had an impressive album lined up for roll-out. He got lyrical heavyweights like K.R.I.T, D Smoke, Royce Da 5’9, Trae the Truth and others to work with him on the album which is saturated with witty punchlines, sick flows and unusual beats. He delivers smoothly his bars which express the experiences and pain of Black people and our painful history and reality. It’s about to be a long one! But I really have to pick every song apart, because it is a thoroughly enjoyable album and I want a first listener to totally understand and reflect on each song that they find most relatable.

Burgeoning Nigerian, Canadian-based artist; TOBi released Elements Vol. 1, a solid mixtape series last month following the warm reception his debut album STILL has received from listeners. He explores and experiments effortlessly, bending genres like jazz, grime, afro-pop, hip-hop and R&B to produce an unapologetically soulful project. The project explores themes like Black Joy as an act of resistance in a fundamentally lop-sided society. He says ELEMENTS is not just ‘the album’, he sees it as his own Dedication (Lil Wayne’s) series as he plans to keep ELEMENTS alive for years to come. TOBi creates his own sound by blending everything he listens to, and drawing inspiration from reading dub poetry to create soulful sounds.

Few weeks to the most lively and busy month of the year, you would think that all the ‘songs of the year’ should have dropped months ago and we would just be waiting to turn up to them. Buuuuuut!!! Nigerian artistes have chosen not to let our ears rest. It’s been raining good music even up until November with so many amazing projects being released that if music was alcohol, we would all be drunk to stupor. Our favorites at Apex Village have also joined the long list of super talented artistes that have contributed to the heavy showers of good music on the Nigerian music scene. Newly signed act, Azanti—who is a singer, songwriter and producer—has teamed up with Psycho YP to release what I find to be an amazing Joint EP titled YP & Azanti Vol. 1. Judging by the title, I’ll say we would be getting more projects like this going forward.

2018! 2018! 2018! if you were a Nigerian child, at this point I would be asking you how many times I called your name. It took you long enough to come to an end, and even though you still linger for a few days more, I think I can safely say thank you for the music but now it’s time to go.

This year brought in so much music; the ones we expected, the ones we begged for and the ones we didn’t see coming a mile away. While this is not a chart-like-piece or in-depth reviews of the projects, I think it’s a good place to start taking stock of what musical gifts 2018 dragged in.

So in no precise order, here goes…

Continue reading “What 2018 Dragged In – The Projects.”

Let me start in the corniest way possible; it was Thursday the 15th of November just after 5pm CAT, she walked through the doors at Trans Africa Radio where I work as a Radio Host & all round superman. I had finally reached the end of the road, it had been months of sliding into her DMs trying to arrange an interview and here she was in the flesh. I was ecstatic!

Continue reading “Let Me Tell You Of A Tugela Fairy…”